The Lure of the Scottish Mountains

Only one winter’s climbing trip to the west of Scotland was planned for this year and that was courtesy of Neil Stutchbury’s invitation to do some more ice climbing, this to follow our very successful trip to Cogne in Italy a few weeks previous.

The annual ice climbing pilgrimage of either one or two trips to the Scottish mountains has been embedded for several years now, so we are fully aware that winter climbing in Scotland has a global uniqueness,  requiring  character traits  that find  discomfort, pain, a need to achieve and recognition of natural beauty, attractive. Hardly pure masochism, but on occasions, akin to it.

Neil had invited me to join him and his daughter’s boyfriend, Pete Hubbard and good friend, David Cronk to do some ice climbing probably in the Glencoe area.  For the first time I was to fly from Manchester up to Glasgow and after a delay of a few hours Storm Doris allowed us to depart. 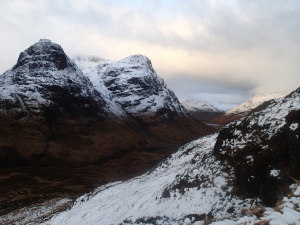 We had already established that there would not be sufficient ice to provide any meaningful climbing and although we kept our options open, it looked increasingly probable that we would be either rock climbing or ridge walking.  The forecast had not been favourable and to date had resulted in fresh soft snow on the high tops and reasonable formation of cornices that were becoming unstable in the warmer conditions. With high winds from the west our options weren’t great and on the Friday morning, having inspected The Three Sister’s area, we opted for a trip along the Aonach Eagach Ridge. Pete was to join us that evening.

We parked in the layby off the A82 at the eastern end of the Ridge and headed north up the slopes to Am Bodach. Nearing the start of the Ridge we passed several groups of climbers. Having donned harnesses and crampons we approached a further group, some of whom were experiencing difficulties in negotiating the first exposed down climbing section on Am Bodach. The offer of our rope was gratefully accepted, whilst they got theirs out. They then happily let us pass and we started to put distance between them and us as we were now the lead group. A situation we warmed to, knowing that no further groups were likely to hold us up on Meall Dearg. However whilst care had been required when moving over the rocks even behind others, that attention to detail was now paramount, as the rock was covered with deep but unconsolidated snow, making it harder to identify good hand and foot holds. 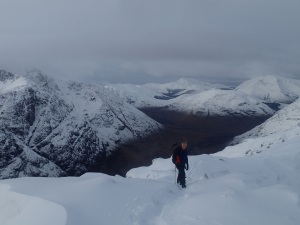 Clachaig Inn ( at the western end) years ago, hiking up from the Red Squirrel Camp site and although a full on day, it had been done in the summer as a solo trip and was totally different to this winter outing. In winter the ridge is a different challenge and one that should not be undertaken as a solo adventure or by anyone without a reasonable degree of experience of climbing in adverse winter conditions.

The three of us were absorbed in our climbing, enjoying both the challenge and scenery that is unique to this part of Scotland. Whilst the wind was not strong, conditions underfoot were engaging and there was always the potential for a slip.

We had made good progress, with the first of the groups following us now several pinnacles behind. This is not to say we were rushing or being gung-ho. Quite the contrary. 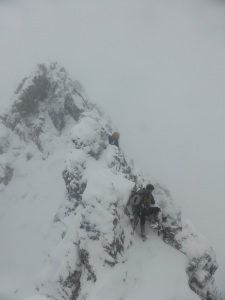 We had climbed The Pinnacles and with David in front followed by myself and Neil bringing up the rear we were unroped and moving at a steady pace. Without warning both David and I first heard Neil shout and then to our horror saw him completely airborne. His body seemed relaxed and open as he fell with incredible speed through the air. Having somersaulted before his first impact, he shouted “oh shit”.  Then he bounced on very steep ground and was thrown some twenty feet back into the air. He probably did two open rolls whilst in the air before hitting the ground again. Both impacts had been on sloping ground at 45 degrees and strewn with large boulders and smaller rocks. He was now rolling rapidly towards a ledge that dropped vertically down the mountain.  I had already thought that a fall of this magnitude could only result in tragedy. I was saying to myself, “Neil, Neil you poor bastard”. Then about five metres from the vertical drop, miraculously he stopped rolling and bless him, the first thing he thought of was to raise his arm to let David and I know that he was alive.

Yes, he was alive, but must have sustained considerable injuries. I set up an abseil for David to go down to Neil. David, a GP (thank goodness!) was very efficient and was soon by Neil’s side assessing his injuries. Neil had certainly been lucky and it appeared, had avoided any serious injury. No apparent broken bones or obvious signs of internal injuries, although early days to identify internal bleeding. He had sustained an injury to his left knee and backside. His helmet had a considerable crack on the left side. It had, if not saved his life, prevented severe head injury. Yes, he had lost his ice axe and his phone later was found to not work properly and the helmet was a mess, but amazingly he appeared to look OK.  Neil was however totally disorientated and had felt extremely dizzy and had probably blacked out immediately after the fall. He was determined to go on. With most of the technical climbing now done, we agreed that this was the best option and we would get off the Ridge as soon as possible. We all knew that getting off the Aonach Eagach can be difficult. To our south lay Coire Liath, an unlikely escape route with an injured climber. We either had to climb Stob Coire Leith and get onto easier ground on Sgorr nam Fiannaidh and find a way down or call in Mountain Rescue. We had sufficient mountain skills and with David’s medical assessment of Neil and Neil’s determination to continue, we were satisfied that we could deal with the situation.

We roped up with David leading, Neil in the middle and me bringing up the rear, very

conscious that Neil was in considerable pain and disorientated. There was still up climbing to be done on Stob Coire Leith and it became apparent that Neil was bleeding from his left knee, leaving patches of red in the snow. We decided to descend before Sgorr nam Fiannaidh immediately north of Loch Achtriochtan, some 800 metres below us. With loose rocks and wet snow over grass, our crampons balled up and compounded Neil’s pain. I was also in pain with the ever present sciatica, that kicks off big time when walking downhill. The cloud had long since drawn in and the rain was now persistent with increasing winds from the west. However arriving at the junction of the A82 and the Clachaig road, David got a lift in the first passing car, back up the A82 to retrieve our vehicle. In the meantime Neil and I walked very slowly towards the Clachaig Inn, warmth and beer, (no alcohol for Neil for a while, we still did not know his internal condition). We too were given a lift. Our thanks to the two girls who gave David a lift and the two guys who took Neil and me to the Clachaig.

Later we all returned to the YHA Hostel in Glencoe where David gave Neil a thorough examination and confirmed that there was no obvious serious injury. This had been the first of our three days climbing. It was Neil’s last for this trip.

Pete joined us later that night. On Saturday David, Pete and I hiked the beautiful Mam na Gualainn, a Corbett that sits immediately north of Loch Leven , west of the Mamores. Neil, unable to walk much, chose wisely to watch the two international rugby matches in the local pub in Kinlochleven. 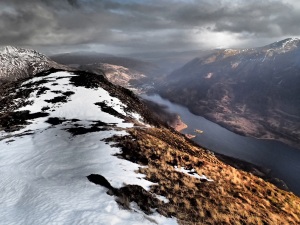 The weather had cleared enough on the Saturday to allow that fantastic walk on Gualainn.  By evening the rain was back and Sunday morning was again wet. With a flight to catch from Glasgow later that afternoon choices were limited. We had come to climb ice and seen none. Now, there is a place called Dubh-Ghlac, also known as Onich Slabs. This is a recognised venue for Dry Tooling. I have to add that I have never climbed there in the dry. It is a place to visit when both time and venues are limited and weather is not perhaps the best. We all went, Neil offered encouragement, whilst Pete exhibited qualities exceeding expectations for his first introduction to Dry Tooling and David certainly enjoyed himself. I just love Dry Tooling, the delicate placing of front points and axes and balancing on seemingly too smaller nicks in the rock, ticks the boxes.

Surprisingly we weren’t that wet on our return to the car where David demonstrated scant regard for the coach load of Spanish tourists at the filling station, as he changed on the forecourt into drier clothes.

We said our farewells to Pete as we dropped him off at the hostel and drove onto Glasgow. As we drove south we saw hundreds of waterfalls coming off the hills, none of us had seen such wet weather before.

I would like to thank Neil for inviting me to climb with him and his friends. It would be

wrong to say that the weekend was a great one, given Neil’s mishap. There were however many very enjoyable aspects, but the most important thing, was that Neil had survived a massive fall and for that I am so very grateful.

And the lesson learnt – however good we are at climbing, occasionally an accident happens. Each of us indulge ourselves in this sport for different, however similar reasons, (all well documented), but the risks that attract us and that we endeavour to manage are always present. It is exactly this, that is at the core of what attracts us to climb.

Here are just a few facts about the Aonach Eagach.  It sits north of Glencoe, running west/east. On it’s south side is the Bidean range which includes The Three Sisters and Ossian’s Cave    It is approximately 10kms long has a max. height of 967m above sea level. Once commenced it is difficult to escape the route until reaching either the western or eastern ends.