A little over two weeks had passed since I had last left Scotland. I had cut short a climbing trip on Ben Nevis. Using the Charles Inglis Clark (CIC) as a base, a group of four of us had been climbing on Ben Nevis. Unfortunately a case of sciatica had forced me to return home early. So I had returned to Ballachulish with slight trepidation. I was meeting up with Neil Stutchbury at the Ballachulish hotel near the village of Glencoe. Neil and I had met last October on a trek to Dhaulagiri in Nepal and he had just finished an ice climbing course run by Jagged Globe, (a company I hold in high regard). His course leader was Tony Halliwell, who had lead us in Nepal. So to meet up with two good friends was a real treat.

Neil and I planned to do some ice climbing over the weekend. After dropping Neil off at Glasgow airport, I would then drive to the Lake District, sleep in the car and get a good days hike in on the Monday before returning home.

After an excellent evening meal and during a few pints we planned our climb for the Saturday. Due to the prevailing weather having come from the west for a number of weeks, east facing climbs would be heavily corniced with snow. With Tony’s assistance, we decided on Aonach Mor West Face. Although the grades are not particularly hard, I hadn’t climbed on the West Face before and was certainly interested in visiting the area. 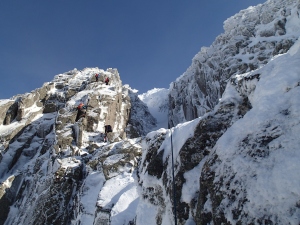 As dawn broke there wasn’t a cloud in the sky, a promising start. Many climbers were already waiting for the 8am Nevis Range Mountain Resort gondola, with most intending to head to the West Face. A fast walk by us saw Neil and I arrive at the base of our chosen climb with only four climbers in front of us. We had decided to climb Western Rib, a 400 metre grade three, two star route. Two climbers had already started on the route, so we chose to take a ‘variation’. Climbing to the right, I lead onto an unexpected long ice pitch. We had anticipated less ice and more mixed climbing, so had brought limited ice screws in an otherwise comprehensive rack. As I climbed it became apparent that the ice was sustained for most of the pitch and offered little protection other than for ice screws. I held off placing my ice screw for a time, balancing the need to protect Neil below me, should I take a fall and reducing the length of my fall, should I come off higher up. The placement was good and would have held, however there was no option to place further gear above it until I found a piece of ‘tat’, shortly above which I set up a belay. That first pitch had certainly focussed the mind. There had been little room for error or misfortune. But the emotion was exhilarating, the sense of being alive, addictive.

The climb developed into a splendid series of relatively easy pitches with clear skies giving views across to Carn Mor Dearg, Carn Dearg Meadhonach with Ben Nevis rising behind. These days are rare in Scotland. We know this only too well. Neil even more so than I. He has ‘bagged all 282 Munros, which having done so, has probably seen him in Scotland over 200 times.

At the summit we were joined by the same couple who had shared our gondola at the ski station. We chatted and again the ‘Six Degrees of Separation’ theory surfaced. The young lady was a large animal vet at the same practice in Ripon in North Yorkshire we used when we had rare breed sheep and cattle. The world is a small place. We returned as quickly as possible to the Ballachulish hotel to watch England win their rugby match. A day to remember.

Knowing it was unlikely that we could surpass the Saturday climb, we were in two minds what to do on the Sunday. Neil is on his second round of Munros and I had asked whether he wanted to do a couple. The weather was again superb, but we had to be in Glasgow late afternoon for Neil’s flight. The weekend had brought out many climbers and with a reduced number of routes being available, we would have to avoid being held up by other climbers above us. Tony had suggested we climb Fahrenheit 451 near The Bridge of Orchy. This is a west facing quality climb on the side of Beinn an Dothaidh and starts at 750m asl, providing a 100m of ice climbing, usually in four pitches. Both Fahrenheit and Centigrade looked busy with climbers, but we had already made the decision to have a hiking day and headed off for Beinn Dorain (1076m) and Beinn an Dothaidh (1004m). We thoroughly enjoyed the hike taking in the 360 degree long views. Looking east to Loch Lyon and west we could see the Isle of Mull and Rum further north. Another reason for wanting to do Beinn Dorain was the fact that in all the years I have been coming to Scotland, even before walking the West Highland Way in the ‘Dark Ages’, I have always looked up to and never down from Beinn Dorain. Perhaps we should have climbed Fahrenheit 451, it is a beautiful cascading climb and may not be back in condition for a few years, but we had a great day on the hill and Scotland will always be waiting for us.

Lord Byron wasn’t the only person influenced by both the agreeable and disagreeable facets of Scotland. He may have been born in London, but the first ten years of his life were spent in Scotland which had a lasting lifetime effect on him, from his faintly perceivable accent, to his departure from accurate memory to one of nostalgia and simplicity as the years passed. Never to revisit Scotland, this wonderful country remained an influence throughout his life. Anyone with a passion for wild places, adventure and the need to feel alive would have empathy with much of what Byron wrote of Scotland. Unlike Byron we will continue to visit Scotland, yes the weather is fickle, but when the sun shines there are few places that can surpass this wonderful country and when it doesn’t there is a rawness that compels the climber to return.

I did sleep in the car near Blencathra. Monday’s dawn saw a brilliant red sky that turned to grey in an hour. High on Blencathra the visibility was down to 40 metres with a strong and rising wind. What a contrast to the past few days.