We have now cycled through eleven States and Ontario.  Tomorrow will see us in our twelfth and final State of Massachusetts. Today has been yet another brilliant ride. The roads are getting very busy now but with the wide shoulder most of the time, we feel quite relaxed as vehicles speed past us.

Our route from Rutland brought is south to Manchester.  A prosperous small town. The first coffee house we stopped at was very popular and for the first time would have taken an age to get breakfast. However a kind elderly lady told us of another place just down the road where we had a great cappuccino and a nice, but less than filling egg muffin.
From Manchester we made our way back in a north east direction up about a 1,000 ft passing through the quaint town of Jamaica and yes it did have an Inn. Unlike the Jamaica Inn on Bodmin Moor in the English West Country, (used by smugglers) this inn was painted white with flowers growing in neatly tendered beds.

The otherwise beautiful town hall in Jamaica. Could the banner have gone someplace else?

Just as we started to enter a village called Bond, I saw the stereotypical ‘old boy’ sitting on his rocking chair,  pipe between his teeth and a chin that lay deep beneath a long and thick beard. He wore blue dungarees and a broad brimmed hat. So tempted to stop and ask for a photo. Would he have abligued or would he have been offended?
We didn’t want to get too tired up in Bond, but couldn’t resist a quick chat with James, the local bear who said he would like to get into cycling. 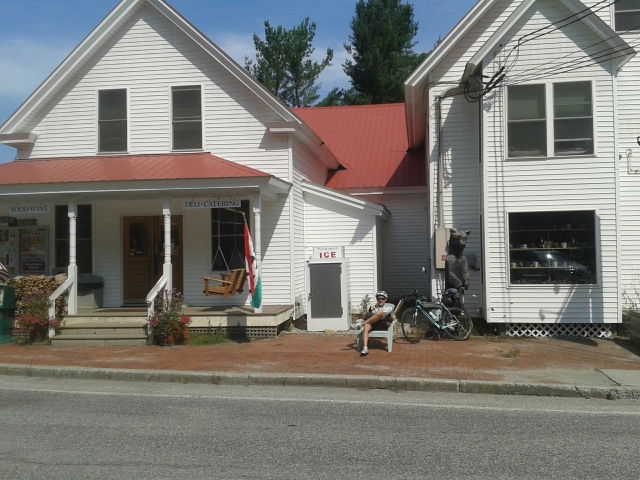 Tim in discussion with James.

James deciding that the saddle didn’t look too comfortable. Tell me about it James!

You may have suspected by now that the temperature had returned to the low 90’s and was having some effect on both our physical and mental performance.

The energy from the  egg muffin had long since been used. So the 15 miles into Battleboro was done on emply.  Battleboro is a large, busy and congested town again not without character. We had ‘natural’ and ‘healthy’ coke, if there is such a thing, to drink and …. yes, a chicken salad!  Another quick 18 miles and some more climbing saw us arrive here on Keen around 3pm. Where Tim Scoles, a friend of Andy’s had kindly arranged for a pint of cold beer to be waiting for us on our arrival. Many thanks Tim.The bar has just opened, so as thirst calls, we’d best go.

2 Responses to And into New Hampshie